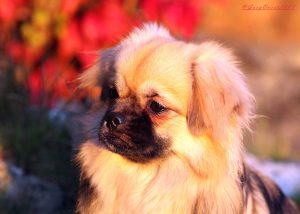 Keeta is the daughter of the beautiful Ch Chenrezi Matchmaker and the fabulous top winning Finnish dog Multi Ch Lilileian Honour of All. She was bred in Finland by our dear frind Tiina Ramo. We are honoured to have this little cracker in our show team. She is a true princess, very typically Tibetan in everything she does.

At home Keeta likes playing in the garden with her pals Jade, India and Louie. The four are great friends and are never far apart.

Keeta has also proved herself as a producer. She delivered six beautiful babies to our young Finnish boy Louie in 2018. One of these young males, Junie, traveled back to Finland where he now resides at kennel Lilileian. Junie has had a fab start to his show career, winning a CC already! Keeta’s daughter Desi remains at Chenrezi, she is a sweet, kind girl, just like her momma.