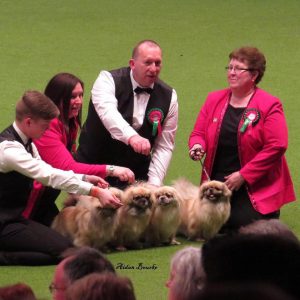 In 2017 we once again took part in the KC Breeder Competition. We were the only team of Tibetan Spaniels competing this year. Imagine how thrilled we were to be shortlisted to the final 10 from an entry of 64 teams of dogs across all breeds. Our dream came true when were chosen in the reserve spot, behind three extremely well known top breeders. We owe a debt of gratitude to our friends Niklas Kalske and Sam Moloney for helping us handle the team on the day. Niklas guided us through, using his vast experience in breeder competitions and his patience paid off! The winning team was:
Ch Chenrezi Keeper of Dreams JW ShCM
Chenrezi Love on the Rocks at Tremorvah
Ch Chenrezi Troublemaker JW ShCM
Chenrezi Another Love JW ShCM

2013 was our first attempt at the competition, and were so proud to be in ‘The Big Ring’ at Crufts . In 2014 we again qualified for the final at Crufts. the team has varied throughout the year, the dogs taking part so have been:

We would like to say a huge THANK YOU to our friends Niklas Kaske, Sam Moloney, Janet and John Denton, Nikki Mullarkey, Ros Garraway, Heather Vine, Lisa Purnell, Maria Clark, and Sharon O’Brien, who have handled with us over the past years.

We couldn’t have done it without you. 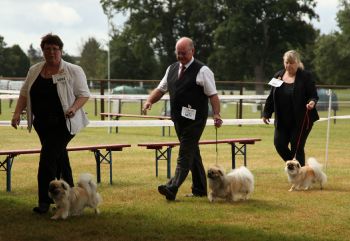