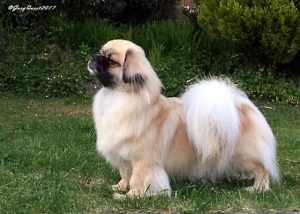 Faberge was born in 2012 to our latest Champion, Tia. She was one of five stunning sable bitches. We had a big dilemma trying to decide which puppy to keep from this lovely litter. Eventually we settled on Faberge because she has the most adorable Tibetan nature. She is a quiet, dignified girl, who is absolutely devoted to her family, whilst being totally aloof with strangers. Of course, she is playful and adventurous, as all puppies are, but she has an old head on her young shoulders! Her best friend is our oldest Tibbie girl, Holly. The two can often be found asleep on the same duvet. Faberge is gorgeous and she knows it, she has earned the nickname “Fabulous Faberge” !

Faberge enjoyed a fantastic puppyhood, she came out with a bang winning Best Puppy and the Puppy Group at Marlborough at 6 months and 1 day old. She has continued to thrill us with her winning ways, culminating in winning the Puppy competition at this year’s Top Dog of Devon, thus crowning her Top Puppy of Devon 2013.

“6 1/2 months old and isn’t she well named, as I feel in time she will certainly cause a lot of trouble for judges who, like me, would like to take her home! Absolutely delicious baby pup, so self-assured, arrogant and positive during her entire time in the ring. She is something special and knows it. Excellent breed type, love her head and expression, beautiful dark oval eyes, excellent ears, clean neck and excellent forehand, level topline, well ribbed back, balanced angles fore and aft and can she move, with such freedom and accuracy. Yes, she is small, but she has time on her side. So promising. BP & RBB. Mary Deats (judge)

At City of Birmingham Fab won the Res CC as well as Best Puppy, under Sally Atkins (Jontygray). Her critique read:

Just loved this quality bitch. Sweetest of heads with that typical aloof expression. Lovely dark mask with that width of muzzle which is lacking in many. So sound in body and movement and shown to perfection. delighted to award her RCC.