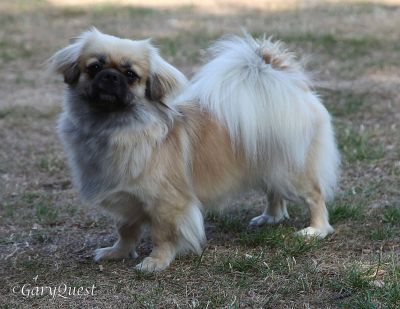 Solitaire is a polished show girl. She absolutely loves showing, and can always be relied upon to give a faultless performance. She is a very successful show girl, as her many wins above evidence. She has a lifetime qualification for Crufts.

Solitaire has also proved herself as a producer. Her daughter Christie was top Junior for her owner Pam Wayman. She has four daughters qualified for Crufts. Solli absolutely loves being a Mum and enjoys her babies, she will suckle anyone’s puppies, even if she doesn’t have milk! She is a great role model for our young bitches.

At home, Solli is a very sweet natured girl and loves to come up on the nearest available lap for a cuddle. She is very friendly and will amuse herself with her many toys or play happily with her friends Tia, Missy and Faith. Her favourite place to sleep is snuggled up to the big teddy on the sofa.