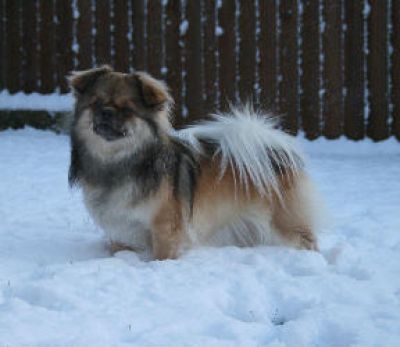 Missy is the daughter of our beautiful black and tan bitch, Ebony. She has developed into a stunning shaded sable, with the most appealing markings. She is a real character at home, full of energy and enthusiasm for life. Missy had a successful show career as a youngster and attended Crufts four times, winning a 3rd under Terry Nethercott. Missy did not really enjoy being a show dog, so we only showed her lightly and decided to let her take ‘voluntary retirement’ in 2015, although she enjoyes the odd day out at shows just to see all her friends.

Missy did, however, enjoy being a Mum and in June 2012 gave birth to a lovely litter of three girls and a boy to Rosanley Ko-Ri at Paulin JW (top sire 2011). Her daughter Summer is well known at shows, and gained her title in 2017. Missy’s grandaughter India is her constant shadow and best pal, the pair are seldom apart.