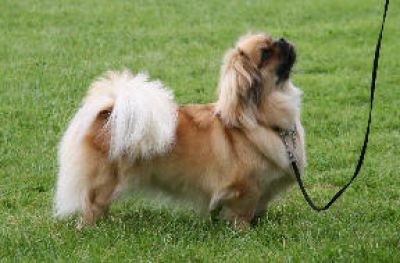 Faith is the only daughter of my beloved Kizzy. She had an amazing start to her show career, winning Best Puppy In Show under KC conformation and movement specialist Carol Coode at only 6 months of age. She took to showing like a duck to water and really enjoyed her days out at dog shows, meeting friends both human and canine.

Faith only had one litter, to Rosanley Ko-Ri at Paulin JW, but what a litter it was! She produced two beautiful daughters, Ch Chenrezi Keeper of Dreams (Tia) stayed here at Chenrezi, whilst Chenrezi Shooting Star for Glishanna made the move to Ireland and now resides with our friend Audrey O’Brien, where she had a very successful show career, and proved herself as a producer. Tia became our second home bred Champion in 2012 and has continued Faith’s line by producing her own champion babies, Faberge and Ellie, who can be seen on their own pages.

As a veteran, Faith enjoyed much success. Totnes was her lucky show, she won Best Veteran in Show there in 2014, as well as Res Best Veteran in Show at Exeter 2014. Faith qualified three times for the Top Dog of Devon competition. She has also helped many junior handlers to practice their craft! Faith is now enjoying a well deserved retirement, but still comes with us to shows from time to time, just to catch up with her friends.

Faith is a real sweetheart at home, she is kind, gentle and quiet. She’s a great role-model for our youngsters and is loved by everyone who has the pleasure of knowing her.