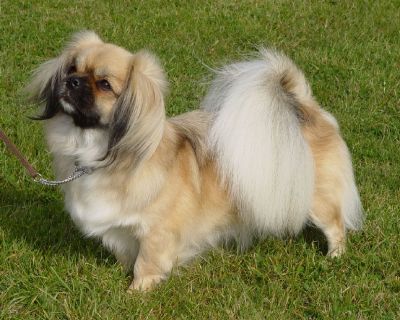 What can we say about our Kizzy? Where to start?

From the moment she was born, it was clear that Kizzy was special. She was a very confident, poised Tibetan Spaniel princess, who demanded attention every time she walked into the ring. As well as being very soundly constructed, Kizzy had a beautiful coat with full fringing and perfect dentition. We were in no doubt that she would make Champion!

Kizzy had only one litter, to the gorgeous male Champion Friarland September Storm (Teddy) owned by Vi Armstrong. One boy and one girl pup arrived in 2006, the girl pup (Chenrezi Keep The Faith) remains here at Chenrezi and has gone on to produce her own Champion daughter. Kizzy adored her daughter Faith, the pair were inseperable.

Sadly, Kizzy was not destined to have a long life. She was taken from us prematurely at age 9 with a nasty form of cancer, which took hold of her in August 2012, she only lived four weeks after diagnosis. She left the world as she entered, with no fuss and quiet dignity. Kizzy was my very special girl and when she died she took a piece of my heart with her.