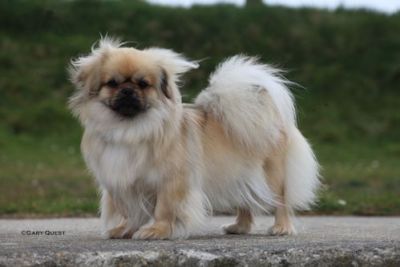 Tia is the beautiful daughter of Faith and Kori who arrived in July 2009. She is a typical Tibetan Princess, being very independent and stubborn when she feels like it and cute and cuddly when she decides the time is right. She loves going to shows and has absolutely no fear of anything. Her very best friend is a smooth Chow Chow called Bo! Tia just loves to show and became a champion by the age of 2yrs. She has had many memorable wins throughout her show career, including Reserve Best in Show under the well respected all-rounder Frank Kane, as well as winning her class at Crufts.

Here are some of her critiques:

“Superbly schooled for one so young & never put a foot wrong. Her head is a delight, correct mouth, good width in chin, well shaped eyes and holds herself so well on the stack. Well bodied, stunning presentation and free in action, should finish well.” Albert Wight, judge

“Stood out in the class, lovely outline and so feminine. Has that head, eye and expression, sound in overall construction; beautifully presented. In action, to me she fitted the bill. CC & BOB.” Bob Gregory, judge.

“This 2yr old attracted my attention the moment she entered the ring and didn’t disappoint with hands on. She impresses immediately to close scrutiny, expressing elegant characteristics that can only be recognised as feminine. Presented in excellent coat and condition. Superb typical head with a well proportioned muzzle to skull ratio, slightly undershot bite, well set and shape to eye, giving the softest of expressions. The naso labial line, perfect lip placement and evident chin present a balanced symmetry that just give the finishing touches to an excellent picture. Her construction is balanced and complementary to each other, her forehand is neat and tidy with complementary angles front and rear that show the required correlation to allow her to present an excellent free flowing movement at the correct speed, being very well handled at all times. BOB and Group 1.” Brian Maurice-Webb, judge.

” The Best In Show line up was of the highest order. Although this was a difficult decision I was more than delighted to award the final accolade to the Tibetan Spaniel Chenrezi Keeper of Dreams, an exhibit whose charm, style, quality and elegant femininity I just couldn’t overlook. Posed or on the move she obviously enjoyed her day. Good schooling and a willing to please personality completed the picture.” Lorraine Webb, judge.

Tia has proved herself as a top producer. She has Two champion daughters, as well as two daughters with CCs and three others with Stud Book Numbers.

We are so proud of our Tia, who is our second home-bred champion. At home, she rules the house, barking orders at the youngsters when she feels they need keeping in line! She has a huge character, which she has certainly passed on to her children!