We met in 1979 and were married in 1980. At the time of our wedding we owned two Afghan Hounds, a Toy Poodle and a Collie x. Our first GSD soon followed, then quickly two more. We continued to show our GSDs and Afghans for several years and bred two GSD litters.

We aquired our first Tibetan Spaniel in 1994, Sharbonne Tash-Shah, from Yvonne Rawley (nee Border). Tash was a consummate show dog, very polished and she could always be counted on to give a perfect performance. Our first brood bitch came from the late Ann Wynyard, Braeduke Pach Marti (Sian). Our first Tibbie litter was born in 1998. 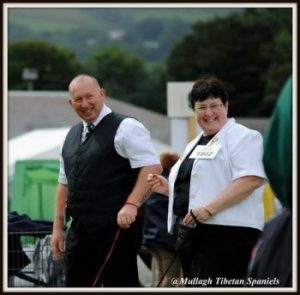 Our first male came from Hazel Butler, Colphil Chung Khi (Tyler) and our second male came from France, although he was English bred, Sharbonne Secret Dynasty (James) was our Tash’s litter brother. James had been sold to France as a puppy, but came to join our family when his show career had finished. He was to produce our first home-bred champion for us in 2002, Ch Chenrezi Kiss’N’Tell ShCM

We currently have sixteen Tibetan Spaniels living here with us, ranging in age from ten months to fourteen years. Four are imports, from Finland and Slovenia, the rest are homebred. Our dogs are very much members of our family as well as show dogs and their happiness comes first in everything we do.

We were awarded the Tibetan Spaniel Association’s coveted ‘Sivas Breeders Trophy’ in 205 & 2016 The Chenrezi breeder team were awarded 4th all breeds at Crufts in 2017. and our homebred Ch Chenrezi Troublemaker JW ShCM won the Benelux title at the World Dog Show in 2018

Aside from the Tibbies, we both believe in putting something back into the dog world. We are Chairman and Seceretary/Treasurer of the South West Utility Club and are both Vice Presidents of Exeter & County Canine Society, where Gary is a committee member and regular trainer at ringraft evenings.

Tina is a fantastic lady whose knowledge of the Tibetan Spaniel is second to none. Unlike me she has the ability to look at a dog and tell you not only who its parents were but most likely who its grandparents and great grandparents were.

Tina’s handling skills are superb and she can get the girls to do pretty much anything. Which is an achievement in itself as those of you who own Tibetan Spaniels will know, if they want to do it they will, if they don’t, they won’t.

Another of Tina’s attributes is that she is very happy and willing to help anyone who has a question on dogs, be it about behaviour, feeding, training, health issues, showing or simply where to go for a puppy. Nothing is too much trouble, you just have to ask.

Gary is a brilliant partner, he has a great ‘eye’ for a dog. He can always pick out a quality dog of any breed. Gary is a gentle giant, very patient and considerate, he whelps all our bitches in a quiet but competent way. They have complete trust in him, which says it all really.

He is also a fantastic photographer. His endless patience comes in very handy at photo shoots! Of course, our Tibbies make great ‘subjects’ and he has plenty of opportunities to take super photos.

If only he had a better taste in music he would be perfect!